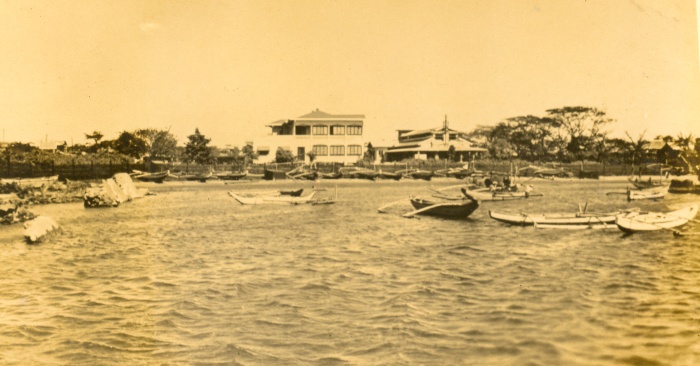 Before World War II, the waters of Manila Bay used to come up to the refectory of the Redemptorist convent in Baclaran during high tide.  After the war it used to lap the shore along Roxas Boulevard. Now the sea is more than a kilometer away from the Church.

The name Baclaran originated from the word “baclad,” which means fishtrap. Baclad is made of rattan used to segregate fingerlings from the bigger fishes during the time when the Baclaran River and the Manila Bay were still used to breed fish. In the early years of the last century, this village was popularly known as “the place of the fishtraps”, thus, people started calling it the “bacladan”, which later became to be known, “Baclaran.” When the Redemptorists settled at Baclaran, the sea was just right at the fence of the compound which today is Roxas Boulevard. In those days, one could still see many fishing boats anchored near the seashore.  After the mass, the Fathers would usually take a dip into the clean water of Manila Bay.[1]

The Redemptorists first came to Manila in 1906. They proceeded, however, to the island of Opon near Cebu where they first settled and began their mission in the Visayas islands. In 1913, they returned to Manila and was entrusted the care of the parish of Malate. In 1931, they transferred to Baclaran. The parish of Malate was turned over to the Columban fathers.

Fr. John Maguire, CSsR recalls how, in olden days, the Redemptorist and the Columbans used to walk along the shore of Manila Bay to visit each other’s convent in Baclaran and Malate. The Parish of Malate was centered around the present Malate Church which was then fronting the beach. When the Redemptorists transferred to Baclaran they were also fronting the beach. Often on cool afternoons they would take a walk to Malate along the beach, have a swim, visit the Columban Fathers who had taken over in Malate, join them for merienda and then walk home. On other days the Columbans would do the same, in reverse order of course. The result was that the two communities became close to each other and until recently were still inviting each other to celebrations in their respective areas.

The enjoyable walk along the beach, however, has now become a health hazard. The beach is a road full of crazy drivers. The sidewalk is the kingdom of street children, beggars, pickpockets, snatchers and the whole thing is wrapped in a blanket of smog and pollution. The beach is more than a kilometer away.

So much for the good old days. They call it progress.

I am passionate about the intersection between new media and technology. I continue to research and apply new media in theology and vice-versa. I am also a fan of Our Mother of Perpetual Help and her continuing relevance in today's digital world. View all posts by Baclaran Phenomenon